Whenever law enforcement or the FBI wants to bring down a powerful criminal, perhaps they might start with surveillance.  After a period of time, officials will search for a small fry who has access to the big fish.  When the weak link is identified, this individual is pressured to provide important information.  If this person does not cooperate, threats of prosecution often persuade them to go along.

Now the Passover and the Festival of Unleavened Bread were only two days away, and the chief priests and the teachers of the law were scheming to arrest Jesus secretly and kill him, Mark 14:1.

Early in the first century, religious officials realized they could not outwit Jesus, so they began to secretly probe his twelve disciples.  During this process, the chief priests identified someone they could influence.  Miffed by Jesus’ waste of perfume, the treasurer Judas Iscariot, was tweaked enough to turn to the dark side.  Tempted by thirty pieces of silver, Judas agreed to betray Jesus with a kiss.

Some of those present were saying indignantly to one another, “Why this waste of perfume? It could have been sold for more than a year’s wages and the money given to the poor.” And they rebuked her harshly, Mark 14:4-5.

Regardless of how strong someone may appear, each possess flaws, imperfections and weaknesses.  Thus, no one is exempt from being exposed as a weak link.  Satan knows your kryptonite, scanning back and forth throughout the earth, waiting to pounce on the isolated, vulnerable and weak.  Therefore, be on guard, armed with the armor of God, Ephesians 6:12-20 so when the days of evil come, you will be ready to defend yourself.

Superman had kryptonite, Samson Delilah and for many coaches, loyalty blinds them from helping their team reach their full potential.  From the sidelines, I’ve seen professionals fail to win a title by filling in their rosters with their guys, not the most talented ones.  Meanwhile, travel ball squads often finalize the team with coaches kids, forgoing success to make everyone’s parents feel better.

Like a student experiencing their first bout of puppy dog love, you can’t get through to these individuals until its too late.  Developing an affection, attachment or devotion is natural, yet seeing the big picture isn’t always possible.  The blinding forces of love make it hard to think straight, especially when an outsider points out certain flaws.  Out of loyalty, feelings prevent most from making the best decisions for the greater good of a team.

In life, sometimes you have to take chances even if it means ruffling feathers.  While you may not change the minds of those in charge, if you remain silent you are committing a sin of omission.  If things go bad, you might even lose friendships.  Nonetheless, if you want those you care about to reach their full potential, don’t be afraid to expose anyone blinded by loyalty.

On Monday, August 11th, 2014, America lost one of its icons in Hollywood.  Whether it was playing Mrs. Doubtfire, Mr. Keating in Dead Poets Society or a psychologist in Good Will Hunting, Robin Williams was a star brighter than life.  However, deep inside his soul, riches, fame and fortune couldn’t replace a heart of depression that only Christ can fill.  Subsequently, this talented actor took his own life, unable to leave in the haste sinful thoughts.

Moses makes an interesting observation in Psalm 90:8-9.  Apparently, God uses supernatural measures to bring secret sins into the light.  Whether you’re a leader of a nation like Moses, head of your household or superstar such as Robin Williams, the truth about your bad habits, flaws and weaknesses will rise to the surface.  Don’t wait to be found out, Psalm 90:9.  Rather, leave your sinful desires in haste, James 4:7 or groans of regret will keep you in the dark on the verge of death.

I won’t speculate on why Robin Williams committed suicide, but I do know countless individuals have moments where death is entertained as a viable option.  Unfortunately, sin has a way of corrupting one’s mind, polluting a person’s rationale thinking.  If you stay in this mental state too late, the pawns of the Devil will steal any joy that remains, kill hope and make self-destruction seem like a good idea.  Fight back these urges now, leave in haste or you too might become deceased.

Another Hypocrite Behind the Driver’s Seat

When I get behind the wheel of my car, something happens to me.  Like an out of body experience, a spirit of impatience changes my personality inside.  All it takes is a few slow drivers, especially in the left hand lane and I become another hypocrite behind the driver’s seat.

Despite my prayers prior to entering my vehicle, the influences of the sinful nature leave my feeling like the apostle Paul in Romans 7:15.  The slightest error made by my fellow drivers erupts into an explosion of complaining, emotional distress and an occasional honk of the horn.  In my quest to fulfill Matthew 5:48, most trips behind the steering wheel often result in conviction, a painful reminder that I have a long way to go, Romans 3:23.

The imagery of 1 Corinthians 13:11-12 illustrates the fact that everyone has room for improvement.  Each soul has major flaws, needing to be transformed from a child into a mature Bible believing adult, Romans 12:1-2.  Unfortunately, there will always be growing pains and along the way, don’t be surprised if you see another hypocrite behind the driver’s seat.

Why Losses Outweigh the Victories in Life

Earlier today, I began to feel like Job, pondering when my recent streak of trials will end.  While attending a friend’s concert this evening, enjoying the Raymond Lee Band, I sensed an answer coming from the Holy Spirit.  If victories out numbered losses, individuals would not learn essential life lessons.  Therefore, God allows losses to outweigh victories in life so that humility produces teachable moments.

As I read the book of Psalms, it appears King David does more complaining than celebrating.  In the tough times. people are forced into a corner, revealing their true character.  Behind the sadness and tears, rough circumstances leads troubled souls to trust in the Lord.  Without failure. you don’t truly appreciate the good things in life.

Perhaps, this is the main message of James 1:2-4.  After the storms of life fade from the horizon, souls are left to pick up the pieces.   Subsequently, wisdom is gained through maturity and perseverance.  Winning is nice, but sometimes victory hides flaws and imperfections.  Thus, the Lord places losses in life more than victories so that Jesus’ power might be displayed in our weaknesses, 2 Corinthians 12:9. 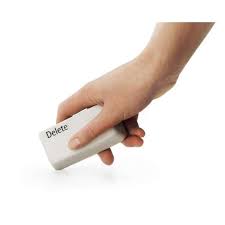 On the surface, a small piece of rubber, either red or white in appearance, seems rather inconspicuous.  Like tiny bread crumbs, these particles are designed to void any mistake made by a lead pencil.  While somewhat flawed, if used properly, the eraser can make imperfections disappear.

As technology continues to improve, the eraser is on the verge of becoming an endangered species.  Since the invention of personal computers led to the extinction of type writers, white out threatens to replace erasers.  With the goal of paperless schools on the horizon, environmentalist seek to save trees, not concerned if or when erasers will be phased out. 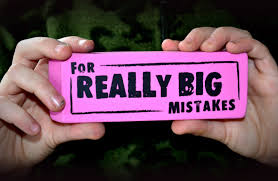 From a spiritual sense, there is only One true Eraser.  This eraser is as white as snow, spotless and pure, without any blemishes.  Unlike the typical eraser that darkens with use, this Eraser remains shiny and new year round.  Therefore, if you’re tired of messing up, making mistakes and ruining the body of your paper, keep your head up.  As far as the East is from the West, this is how far God is willing to go to erase the sins from your life, Psalm 103:11-12.