The term timeshare was coined in Great Britain during the 1960’s. This vacation system where a property with a divided form of ownership or use rights became popular after World War II. The downside to modern timeshares is that the exact price varies depending upon the week that you own and maintenance fees often increase every year. In addition, trying to sell your timeshare can be extremely difficult which explains the rise in companies devoted to selling unwanted timeshares.

The Time Share Theory is based upon the decisions that you make in life. The choices you make daily will reveal your priorities. During a portion of the Sermon on the Mount detailed in Matthew 6:19-24, Jesus uses the analogy, “where your treasure is, your heart will be also,” Matthew 6:19-24. Thus, whether on purpose or subliminally, habits will determine how you spend your time each week.

Just as the Son of Man came not to be waited on but to serve, and to give His life as a ransom for many [the price paid to set them free], Matthew 20:28.

A disciple from the tribe of Levi unveils Jesus’ time share theory. According to Matthew in the passage above, Jesus viewed each day as an opportunity to serve to God. John Marks shares a story how an early morning time praying by Jesus changed and shifted what was previous scheduled, Mark 1:35-39. If your daily goal is to seize the day, how your share your time will determine the outcome. The only question remaining is will you be more like Ebenezer Scrooge this Christmas season or more like Jesus?

The Hope of Eternal Life

Hope can be a dangerous thing.  Yet, without hope, there’s nothing to look forward to.  This is what kept Andy Dufresne going during his life sentence at Shawshank State Penetenuary in the film Shawshank Redemption.  Subsequently, Andy foresaw beyond the bars in front of him, envisioning a life beyond prison.

In the hope of eternal life, which God, who does not lie, promised before the beginning of time, Titus 1:2.

As a Christian, the same concept applies.  For some, life on earth can be a prison, trapped by an unforgiving world.  While some moments may be treasured, the Bible promises another world free from sin, death and pain.  Therefore, hope waits in eager expectation of eternal life in heaven.

I write these things to you who believe in the name of the Son of God so that you may know that you have eternal life, 1 John 5:13.

One of Jesus’ disciples suggests this isn’t an empty promise.  Rather, eternal life is something you can embrace and plan for before you die.  Like making a will, Romans 6:23 details the process that is involved.  Therefore, don’t wait until its too late.  Instead, accept God’s free gift so that the hope of eternal life becomes real.

If you’re not careful, people can get snippy when you point out one of their weaknesses.  Whether its a defense mechanism or a way in which individuals bend the truth, few want to hear about their imperfections.  However, there is a famous conversation where Jesus reveals one thing people lack.

As Jesus started on his way, a man ran up to him and fell on his knees before him. “Good teacher,” he asked, “what must I do to inherit eternal life?” – Mark 10:17

One day, a rich young ruler humbly falls at the feet of Jesus.  Desperately wanting reassurance of his spiritual quest to reach heaven, this ruler asks, “what must I do to inherit eternal life?”  While most teachers would seize this teachable moment, Jesus pauses to redirect the topic.  Despite being the son of God Jesus responds with the words, “why do you call me good?”  Essentially, the Lord proclaims that no one is good but God.

Jesus looked at him and loved him. “One thing you lack,” he said. “Go, sell everything you have and give to the poor, and you will have treasure in heaven. Then come, follow me.” – Mark 10:21

Using the ten commandments as a measuring stick, this benchmark serves as a guide as you interact with members of society.  In a sense, this is expected, what any follower of God should do.  Thus, when Jesus adds one final requirement, this ruler leaves Jesus’ presence heart broken.  Though other gospel writers vary their details of this encounter, it appears that this ruler trusted in his money rather than placing his sole faith in God to provide.  This same expectation applies today.  Do you lack complete trust in the Lord or fervently rest in Jehovah-Jireh?  May your reply to this question motivate you to draw closer to Christ.

Footbaal, Basketbaal and Basebaal?  Idolatry involves cultism, devotion and zeal for a pastime.  When any hobby get’s out of hand, obsessions can lead to a veneration, turning into a form of worship.  Priorities and time allocation often reveal where a human heart lies.

The idols of the nations are silver and gold, the work of human hands. They have mouths, but do not speak; they have eyes, but do not see; they have ears, but do not hear, nor is there any breath in their mouths. Those who make them become like them, so do all who trust in them! – Psalm 135:15-18

This allegiance is nothing new.  Developing a well-rounded personality is beneficial, yet idols influence individuals as nations rise and fall.  Whether religion is a fad, trend or life long pursuit, the powers of darkness will persuade some to delay, postpone or quit their journey called faith.   Thus, peer pressure sways the weak toward to idols of nations.

Put to death therefore what is earthly in you: sexual immorality, impurity, passion, evil desire, and covetousness, which is idolatry. – Colossians 3:5

According to Jesus, there is a direct correlation between one’s heart and idols.  “Those things you treasure will permeate into your heart, Matthew 6:21.”  Its no wonder that King Solomon urged the Jews to guard their hearts, Proverbs 4:23.  Therefore, to avoid the same fate of fallen saints throughout history, 1 Corinthians 10:1-6, follow the words of Deuteronomy 28:1-3.  When quiet times with God become a habit, escaping the idols of nations can be achieved.  May your life be filled with prayer, meditation and worship.

Every day when I arise from sleep, my mind is overwhelmed by the choices at hand.  Do I read?  Should I write?  Perhaps I need to work out?  Maybe hitting the snooze button and rolling over is my best option.  Either way, the choices you make will dictate the path your life takes.

For where your treasure is, there will your heart be also. – Luke 12:34

Like most years, my New Years Resolutions are being modified as desires to lose weight, eat healthy and draw closer to God have fallen short.  Sometimes I feel as if I am in a tug of war, pulled in a direction I don’t want to go, yet over time I submit, dragged to a new low.  By enduring these trials, I am beginning to comprehend the words of the apostle Paul as he explains how the sinful nature can influence one’s priorities.

When Jeremiah opened his mouth to Israel, negative messages usually came forth.  Thus, this servant of God was nicknamed the weeping prophet.  If you too feel depressed, frustrated or lost, there are some promises in the Bible to cling to.  Lamentations 3:20-24 suggests God’s forgiveness is new every morning.  Therefore, if you fail to keep the priorities that you hold dear, may God’s grace lift you up each time you fall.

Treasures Beneath The Surface 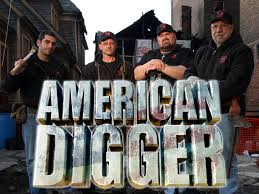 Ric Savage is living proof that sometimes real treasure exists in your own backyard.  This former professional wrestler is now the star of Spike TV’s reality show, American Digger.  Using history like a treasure map, Ric’s team travels across the country in search of valuable pieces of Americana.  However, before he can dig, Ric must receive permission from home owners, offering to split his profits.  The rest of a typical episode contains the quest to uncover hidden gems using medal detectors or modern technology to locate treasures behind the surface.

Unfortunately, most treasure stories don’t have a happy ending.  Such is the tale of a farmer who sold all his possessions to search for diamonds.  Like a gold rush, this man was inspired to leave his family behind in America to fulfill a lifelong dream of striking it rich.  Tired of just making enough to survive, he longed to provide a better life for his wife and children.  Thus, off he went, first to South Africa, then to India and finally to a mine is Spain.  In a moment of despair, he jumped into a raging river, drowning; never tasting success.

Meanwhile, the man this farmer sold his property to continued to farm, yet he began to uncover a rocky patch of soil.  To protect his plow, this man placed the larger rocks on his mantel, above a fireplace.  When a local priest paid a visit to the new resident, welcoming him to the community, he was shocked by these large rocks.  After an initial exchange, the priest asked the man where he had found these unusual rocks.  Nonchalantly, he replied, “they are all over this property”.  Astonished, the priest replied, “do you know what you have?”  Curious, the man answers, “No, what are they?”  As a former jeweler prior to attending seminary, the priest responds, “you have unearthed acres of diamonds!”  This story inspired Russell Conwell’s famous speech, Acres of Diamonds.  Russell’s success as a minister and writer led him to found Temple University in Philadelphia.

Life often plays cruel tricks on us, like this dead farmer.  The one thing he longed for in life was right in his own backyard, beneath the surface.  Sometimes, before you make rash decisions, you have to consider the cost, Luke 14:28-33.  While Satan may lead you to believe the grass is greener on the other side of your fence, God has surrounded you with living treasures: family, friends and possessions.  Therefore, don’t leave your land until the Holy Spirit has helped you unearth treasures within, 1 Corinthians 12:11.  As I continue to search for full time employment, I pray that God will help me dig deep enough to find that diamond in a rough economy.