The Sheep Without A Shepherd

If you’ve ever gone to a mall to people watch, it doesn’t take long to see who knows where they are going and who is lost, trying to find their way.  Whether you’re driving a car, searching for something you’ve misplaced or walking on a unmarked trail, everyone from time to time experiences the pain of loss.  In the midst of this crisis, a sense of helplessness paralyzes souls, making it obvious that no matter hard one tries, you can’t save yourself.

While traveling throughout towns and villages, Jesus observed the crowd of individuals following him.  Watching intently, tears began to swell up in his eyes, as Jesus saw this group as sheep without a shepherd, Matthew 9:35-36.  They were looking for something more in life, hoping that Jesus had the answer.  Like sheep aimlessly roaming the countryside, hungry hearts longed for meaning to life.

Today, the silent majority wonders when their Shepherd will return.  As chaos abounds, modern sheep have been led astray by false prophets, hypocritical leaders and the twisting of the Bible.  Exiting the church after high school or during college, pessimistic sheep are searching for alternative means to enter heaven’s gate.  Although some turn back, coming to their senses like the prodigal in Luke 15, a growing number remain sheep without a shepherd.

When I was in junior high, I lost my retainer walking home from a friends.  Although I should have had it in my mouth, I was a teenage boy who just happened to put this retainer in a pocket with a hole.  To make matters worse, it was late fall with large leaves everywhere on the ground.  As I retraced my steps, I had to get a rake, spending hours until dark searching and praying.  Unsuccessful, I went back early the next morning on Saturday, desperately hoping I didn’t have to tell my parents I lost a $300 dental piece.  On a whim and many prayers, I tripped over my retainer, uncovered all the debris and went home rejoicing.

In the gospel of Luke, a doctor devotes an entire chapter to the theme of lost and found.  Whether its a sheep that wandered off from its owner, a woman misplacing a valuable coin or a rebellious son who lost his moral compass, each parable illustrates the love of God the Father.  According to Luke 15:7, any time a sinner who has lost their way finds their way back to Jesus, angels celebrate in heaven rejoicing over a repentant soul.  Whenever the lost are found, fairy tale endings occur.

However, today there are more distractions to cause the curious to stray off course.  In fact, one may say the severity of temptations in this age may be greater than ever.  Nonetheless, you should not use disclaimers or create a built in excuse for sin.  Moreover, 1 Peter 2:11-12 is pertinent advice, warning the unprepared by the invisible war just in case anyone get’s too comfortable.  As for now, make sure pride doesn’t convince you to believe that you can be your own shepherd.  Follow the principles of Proverbs 3:5-6 and you will stay in communion with God.

I’ve heard Psalm 23 read several times at funerals that I’ve attended.  However, this morning the first verse struck a cord within my heart.  “I shall not be in want,” jumped off the pages at me as if God was trying to get my attention.  Will I trust the Lord to fully provide for my needs or will wants inside my sinful nature force me to take back control of my life?

The prophet Isaiah makes another comparison with sheep, claiming each person have moments in life when they reject their shepherd, turning toward their own way, Isaiah 53:6.  While the great shepherd is patient, stubbornness has driven many far from green pastures.  Instead of relying on shepherd’s crook to get back on track, selfish steers countless toward a path of destruction, Matthew 7:13

Nonetheless, the words of Jesus in Luke 15:11-16 are much closer to reality than the average person wants to admit.  If only I could came to my senses, then I would hand over the keys to my lord.  Yet, a long Christmas list of wants has brought me to a spiritual pig pen, stuck in the mud of empty promises of this world.  May the rod of the great shepherd knock some sense into you before another innocent victim enters the grave.  I pray that the valley of the shadow of death will prompt you to trust Jesus, yielding your wants on earth for a greater cause, Luke 15:7.

In the Middle Seat 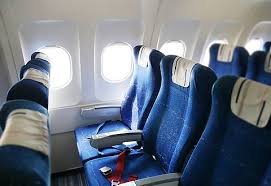 Before the days of mandatory car seats and vehicles with air conditioning, I usually found myself in the middle seat, between my 2 older sisters.  Recently, I was forced to take the only empty seat on an airplane, traveling from Chicago to Los Angelos for 4 hours with 2 strangers.  Whether as a child or adult, being caught in between can be unsettling.  Yet, while in this position, you have the ability to influence others. 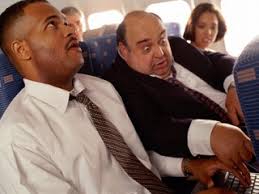 After serving 6 years on a church board, I realized that I was sitting in the middle pew, between the shepherd and his sheep. John 10:1-5.  Unfortunately, I lost sight of the role God had placed me in.  A similar fate spread to most of the other elders, who wilted when the going got tough.  Although I thought I had done what I could, hindsight has revealed I should have been more proactive in protecting God’s flock.

From a modern perspective, the man and or woman in the middle has a great opportunity to sway others toward their worldview.  When a leader seizes the moment, their witness, good or bad, can mold, shape and transform innocent bystanders, 1 Thessalonians 4:11-12.  By rubbing off on those whom you encounter, you have the power to Leave Jesus as portrayed in Send the Beggar’s song on their Closer to Complete album.  Therefore, if you want to leave your mark on this generation, don’t let the sun go down until you have maximized each moment you find yourself sitting in the middle seat.

From One Shepherd to Another 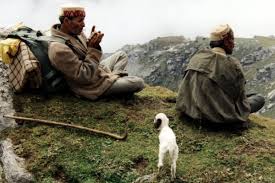 The older you get in life, your chances increase that someone close to you will die.  Thus, most people will attend a funeral at sooner or later.  One of the most common passages read during funerals is Psalm 23, often quoting the entire chapter.  When my mom’s father passed away several years ago in Elizabethtown, Pennsylvania, my family was at his side as he breathed his last breath.  My sister Cindy, read to him Psalm 23:1-6 over and over again to ease his pain.

According to 1 Samuel 16:11, David was a shepherd boy, tending his father’s sheep.  In Psalm 23, David uses imagery, possibly recounting his own experience as God’s Spirit inspired him to write about a heavenly shepherd.  Knowing the daily requirements of a seasoned shepherd, David pours out his heart, placing his faith in God’s hand.  Meanwhile, John, the disciple whom Jesus loved shares a similar account in chapter 10 of his gospel.  John quotes Jesus in 17 of the first 18 verses, explaining there is only one way into heaven, through the gate of the Shepherd, who know and follow his voice. 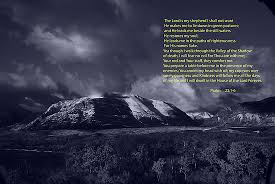 In reality, human beings are dumb creatures like sheep, like the blind leading the blind.  When things are going well, its easy to navigate through life, whether you have a GPS or not.  However, as you encounter canyons, valleys or wastelands, relying on a shepherd may be the difference between life and death.  When push comes to shove or where faith meets fire, who will you call to come to your aide?  From One shepherd to another, come back to the pen before its too late, John 10:17.  The Great Shepherd is calling you home, retreat now to be by his side, Psalm 23:6.