The End of Days

Whether you pick up a news paper to read, watch headline news or listen to daily conversations, life is full of opinions.  Each voice filters current events through their own worldview, trying to sway others to embrace their beliefs.  However, some arguments deviate from the truth, based upon emotions rather than the facts.  The only conclusion I have come to recently is we are living in the end of days.p

Jesus first gave initial warning signs in Matthew 24:6-15.  The end of days is compared to a pregnant woman enduring labor pains.  Contractions will begin with false Messiahs, followed by wars and rumors of war.  In addition, earthquakes and famines will bring death, suffering and trials to the ends of the earth.  As these pains intensify, persecution, hatred and wickedness will spread.  One of Jesus’ final statements rings true today, “the love of most will grow cold.”

I’m no prophet nor will I make any predictions.  Yet, as I look to the Bible to try to understand what’s going on in the world, the apostle Paul builds upon Jesus’ words, 2 Thessalonians 2:3-9.  In the last days before Jesus returns, Satan will influence human being to believe lies.  As soon as minds become deceived, lawlessness will reign.  Once a baby is ready to come out, you can’t stop this natural process.  However, if these signs are a precursor to the end of days, prepare your life now or you may be left behind.

A Revelation of Worship

Critics of the Bible have made numerous arguments stating their case against biblical accuracy.  One of the strongest points skeptics have made uses the words of the Scripture to enhance their position, Romans 3:9-12.  If mankind is indeed fallen, how can imperfect people become vessels of holiness.  Well, its quite possible that authors of God’s Word may have received revelations of worship.

According to Exodus 24:12-18, the Lord called Moses to go up into the mountains and stay for 40 days and 40 nights.  Despite any hidden motives or prideful moments, it was likely during this period that Moses recorded the first 3 books of the Bible, taking notes as the Lord spoke.  However, half of his job was already done, receiving stone tablets with commands, laws and further instructions for Israel.  Whenever someone meets God in a quiet place, a divine connection opens the door spiritual intervention and perhaps modern revelations of worship.

One of the places on earth where I have experienced God’s presence was at a wilderness camp in Minnesota, during the heart of winter.  In the final days of Tentmaker’s Youth Ministry Trade School, there was a mandatory 24 hours of silence.  Instead of interacting with future graduates, our final assignment was to engage the Lord through prayer, reflection and Bible Study.  This was a lonely time as I realized that my new friends would soon be spread out across the country, taking what they had learned to a new church and community.

A few months later, I spent a semester teaching at a boarding school in the Monongahela National Forest.  Known as the High Scope Institute for Ideas, this school focused on career underachievers who endured difficult living conditions.  Many of these 13-15 year olds lived in poverty with dysfunctional families.  If this wasn’t enough, several girls had already given birth to children while most boys became first time dads by age 13.  Despite these distractions, the mountain provided a special refuge.

During an activity called 20/20, students were forced to spend 20 minutes a day in solitude either journaling, reading or reflecting on life.  Although some slept, I began to write poetry without any formal background.  Soon songs began to play in my head and before I knew it, I received a revelation of worship called a Simple Confession.  The Holy Spirit gave me 12 songs which I later made into an album.  If a spirit of poetry and song writing can fall upon me just because I was still once a day; then I believe its probable that the Bible is truly the inspired words of God, given to men and women through a still small voice.  Practice Psalm 46:1o and maybe you too many receive a revelation of worship.

Caught in the Middle 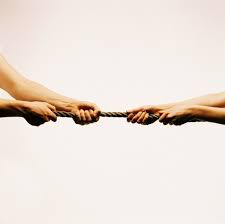 Children can become casualties of war, caught in the middle of their parent’s divorce.  As a teacher, I’ve seen this far too often, with kids used as pawns to make the other spouse jealous.  Maybe this explains Jesus’ tone within Matthew 18:1-9, a warning to all adults to insure their actions do not lead a little one astray. 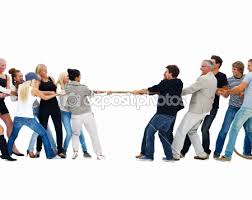 As a friend, its not uncommon to be caught in the middle of infighting.  Gossip, slander and half truths are the usual suspects, aimed at swaying you to their side of the argument.  Unfortunately, playing favorites is easy to fall prey to, something the pagans of Jesus’ day indulged, Matthew 5:46-47.  Yet, God expects Christians to possess higher standards, Matthew 5:48, striving for perfection in Christ, Philippians 4:13.

Casting Crowns addresses this issue in their song Somewhere in the Middle.  From their The Altar and the Door album, Casting Crowns sings about the ongoing tug of war that exists within each soul.  The disciple Peter and the author of Hebrews highlight this dilemma of being in the world, 1 Peter 2:11-12, yet called to look beyond this present world, Hebrews 12:1-2.  Thus, as you find yourself caught in the middle of right and wrong, remember the apostle Paul’s words in Romans 12:1-2 so that you will conform to God’s ways!