The Altar of the Souls of Martyrs

John Foxes’ Book of Martyrs was first published in 1528. While attending Seminary part time back in the late 1990’s, one of my classes studied martyrs not mentioned in the Bible. Men and women of faith suffered horrific deaths during Nero’s persecution of Christians. These tragic deaths intensified in early 300 AD under the oppressive Roman Emperor Diocletian. These individuals will be rewarded by their ultimate sacrifice.

When the Lamb broke open the fifth seal, I saw at the foot of the altar the souls of those whose lives had been sacrificed for [adhering to] the Word of God and for the testimony they had borne, Revelation 6:9.

As John witnessed Jesus break open the fifth seal in the book of Revelation, there was an altar dedicated to the souls of martyrs. At the foot of this altar, the souls of dead Christians who were killed for not compromising their faith began to share their testimonies. While most of these individuals aren’t mentioned in the Hall of Faith found in Hebrews 11, this scene reminds me of the lyrics of the hymn Blessed Assurance, “This is my story, this is my song.”

They cried in a loud voice, O [Sovereign] Lord, holy and true, how long now before You will sit in judgment and avenge our blood upon those who dwell on the earth? 11 Then they were each given a [b]long and flowing and festive white robe and told to rest and wait patiently a little while longer, until the number should be complete of their fellow servants and their brethren who were to be killed as they themselves had been, Revelation 6:10-11.

The apostle Paul devotes the opening chapter of his letter to the Church at Galatia to promote sharing your faith. Paul uses a teachable moment to express why Christians should strive to please the Lord and not other people, Galatians 1:9-10. Paul then transitions to three keys parts of any testimony: Galatians 1:11-24. The first step is conveying how you lived prior to entering into a personal relationship with Jesus. This past leads to what event(s) led you to trust Jesus as Lord and conclude with how Jesus has transformed your life. May the altar of the souls of martyrs inspire you to share your own testimony.

Posted in Truth and tagged altar, Blessed Assurance, faith, John Foxes' Book of Martyrs, martyrs, martyrs not mentioned in the Bible, Nero's persecution of Christians, share your own testimony, sharing your faith, The Altar of the Souls of Martyrs, the fifth seal in the book of Revelation, the Hall of Faith found in Hebrews 11, the oppressive Roman Emperor Diocletian, transformed, trust Jesus as Lord. Bookmark the permalink.

The Point of the Cross

In the Old Testament, initial commandments, laws and principles were passed down through word of mouth from one generation to the next.  Until Moses arrived upon the scene, there was no written word of God.  As one of the forefathers of Israel, God spoke directly to Moses, usually in the mountains on either Mount Horeb and or Sinai.  One of the messages delivered to Moses is that there is no forgiveness without the shedding of blood.

For the life of the flesh is in the blood, and I have given it for you on the altar to make atonement for your souls, for it is the blood that makes atonement by the life, Leviticus 17:11.

In the early first century, Jesus built an earthly ministry using disciples.  Prior to his death of the cross, Jesus revealed the purpose for his human sacrifice.  Befuddled by Jesus words, many of his followers thought he would become an earthly king.  Thus, it wasn’t until resurrection Sunday when the disciples began to connect the dots.  The apostle Paul writes several of his epistles about the point of the cross.  Jesus who had no sin became sin for us so that in Christ, we might become the righteous of God.

He is the propitiation for our sins, and not for ours only but also for the sins of the whole world, 1 John 2:2.

An entire chapter of 1 Corinthians is devoted to Jesus’ relationship to the cross.   According to 1 Corinthians 15, Jesus conquered sin and death with his resurrection.  In a letter to the church at Colosse, Paul talks about how Christians are buried with Christ in their baptism and raised with Him through the resurrection.  So what is the point of the cross?   Life begins at the cross, Matthew 16:24-26, as you deny yourself, take up the cross and follow Jesus as a servant and vessel of love.

Go Back To The Mountain

The imagery of the Old Testament uses mountains as the place where God resides.  The book of Exodus refers to Moses’ skin as sunburned and windburned after exiting God’s presence in the mountains.  However, there is something unique about mountains, often glanced over by those who read the Bible for the first time.  According to Genesis 12:6-8, Abram builds the first altars, one in the place where God first revealed himself and the other up in the hill country between Bethel and Ai.  It was on this mountain, where Abram called on the name of the Lord for the first time. 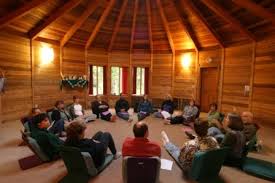 Unfortunately, this mountain top experience didn’t last long as Abram quickly turns to his old self, lying to save his own life.  Since Moses wrote down the accounts of Abram well after his death, there isn’t any details like Jesus’ prayer with his disciples in the Garden of Gethsemane, Matthew 26:36-46.  One can only speculate what Abram said to God as he returned in Genesis 13:3-4.  Confession is a given, acknowledging his wrong thinking and asking God to provide daily bread for the remainder of the famine is likely as well.  Nonetheless, this mountain held sentimental value.  This was the place where Abram first began his personal relationship with God.

From a modern sense, Christian’s have a certain church, retreat center, city or place where they first met Jesus.  Whenever believers lose their way, its vital to return to this place so that one can reconnect with God.  Despite all of our shortcomings, God longs to spend time with his children.  Therefore, before the summer comes to an end, go back to the mountain, to the place where you first met Jesus.  May this journey bring peace to your soul!

Writing in the Sand 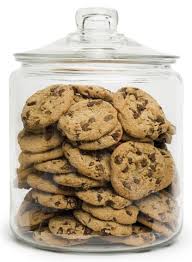 The idiom “caught with your hand in the cookie jar” is used when a person is caught doing something wrong.  Meanwhile, the phrase “caught red-handed” refers to being caught in the act of committing a misdemeanor, with the evidence there for all to see.  Either way you want to express or slice it, sooner or later everyone will be exposed as a sinner.  This is the situation you will find a woman, caught in the act of adultery in John 8:3.  Eager to follow the Law Moses commanded, the religious leaders are waiting on Jesus for final approval, to commence the stoning. 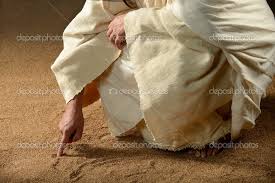 Seeing right through them, Jesus turns to an unusual but effective strategy, writing in the sand, John 8:6, 8.  Up to this point, Jesus had always followed a question with a question, not responding directly to the Pharisees and teachers of the law.  However, readers are left wondering, “what in the world did Jesus write in the ground with his finger?”  This debate continues today with suggestions of biblical laws, jotting down the thoughts of these leaders, secret sins each accuser had done or was in the process of committing.  Unfortunately, no one will know for sure until heaven, left to ponder what written words could have caused each Jew to drop their stone and leave the temple courts. 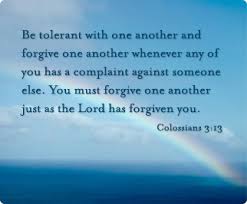 As Easter Sunday, 2013 draws near, you must remember Jesus’ spoken words to this woman, “Go now and leave your life of sin,” John 8:11.  Even if you have been caught with your hand in a cookie jar, there is redemption available to those humbled and sorry for their sin, John 3:16-17.  However, if you fail to leave your sin at the altar, relapse is almost assured, ruining Jesus’ sacrifice, Hebrews 10:26-27.  Thus, embrace Jesus’ writing in the sand, receive God’s faithfulness, 1 John 1:8 and flee from darkness by walking in the light, 1 John 2:6. 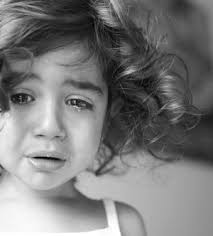 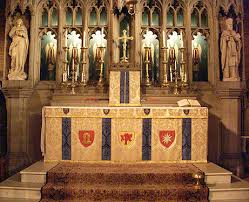 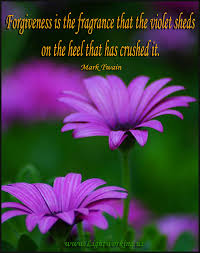