When an individual is nominated to serve as an ambassador, cabinet member or judge, politicians host hearings for these potential candidates.  Members of Congress take turns asking a series of questions.  This exchange is considered a litmus test as leaders are hoping to learn how what each believes, thinks and how they will serve if appointed.

Anyone who does not provide for their relatives, and especially for their own household, has denied the faith and is worse than an unbeliever, 1 Timothy 5:8.

In a letter to a teenager pastor, the apostle Paul shares a spiritual litmus test.  The passage above serves as a key indicator, revealing the character of a church member.  Emphasizing faith in action, Paul wants to ensue that this young shepherd choices his leadership wisely.  Anyone who does not show care, love and respect to family is not fit to represent Christ.

Therefore, anyone who rejects this instruction does not reject a human being but God, the very God who gives you his Holy Spirit, 1 Thessalonians 4:8.

In the first century, Bereans were the standard for biblical churches.  This congregation was taught not to fall for gossip, hearsay and rumors.  Rather, leaders were trained to test everything that they heard against the Word of God, 1 Thessalonians 5:21.  This practice prevented false teaching from being embraced.  In the end, each day is like a litmus test.  The decisions you make speak louder than words.  These choices will determine if you accept or reject God.  May this litmus test inspire you to adhere, follow and live out the instructions within the Bible.

Do not treat prophecies with contempt but test them all; hold on to what is good, 1 Thessalonians 5:20-21.

During one of my first years of teaching high school, a few students broke into my room, logged on to my computer and created a fake My Space Account in my name.  Unaware of this site, rumors began to spread which initially tarnished my reputation.  A few years later, a friend developed a couple of mock EduBlogs to show me the type of technology I could incorporate into my curriculum.  Unfortunately, these were never deleted leading to a trip to my principle’s office.  Evidently, this site suggested I was a faith healer who charged $25 per healing.  I can laugh about it now, but when gossip is full blown lies run wild.

Reject every kind of evil, 1 Thessalonians 5:22.

As I listen to hourly news updates, it appears that Democrats and Republicans are daily participating in this venture in one way or another.  Some facts are taken out of context.  Others’ words are distorted to imply a controversial view.  Meanwhile, a few are down right nasty, exaggerating and lying to convince the America people that their side is correct.  Ascertaining what the truth is valuable, but when opinions are being argued, absolutes do not apply.  Thus, before you believe the next thing you hear, read online or see, test everything so that society will put an end to lies gone wild.

Buy the Truth and Don’t Sell It

As commentators, the media and writers continue to exaggerate and stretch the truth toward political lines, its hard for the average American to know what is right.  Subsequently, a climate has been established for individuals to unknowingly embrace lies.  Its no wonder that America has become a nation divided by a lack of clarity.

Buy the truth and do not sell it— wisdom, instruction and insight as well, Proverbs 23:23.

According to Solomon, truth is something that must be sought out.  The apostle Paul takes this process one step further, to test everything you hear and read.  While you should be able to trust certain people and outlets, if you don’t question anything you are opening yourself to becoming vessels of propaganda.

Do not treat prophecies with contempt but test them all; hold on to what is good, 1 Thessalonians 5:20-21.

Romans 10:17 reveals the faith comes from hearing and reading words of the Bible.  Without a daily intake of the Bible, anyone is vulnerable to embracing and believing lies of the Devil.  Therefore, don’t let another day go by as a low information voter.  Rather, buy the truth and when you obtain it, don’t sell it!

Every day in the world friction exists.  This may take the form of an altercation, falling out or squabble.   As individuals struggle to remain in control, attitudes, egos and personalities clash.  This constant friction leaves behind a trail of alienation, enmity and strife.

And constant friction between people of corrupt mind, who have been robbed of the truth and who think that godliness is a means to financial gain, 1 Timothy 6:5.

In this age of enlightenment, minds are open to new ideologies, philosophies and teachings.  Subsequently, sometimes curious individuals seeking answers to the meaning of life will begin to cling to strange new ideas.  Desperate for logical explanations, some will even abandon former beliefs to justify or rationalize where they are spiritually.

See to it that no one takes you captive through hollow and deceptive philosophy, which depends on human tradition and the elemental spiritual forces of this world rather than on Christ, Colossians 2:8.

Decisions made without thorough investigation can lead to what the apostle Paul refers to being robbed of the truth.  While visiting the city of Colossae, he realized how vulnerable young people are to being swayed by human tradition.  In view of this, before you fully develop and embrace a worldview, follow the principles of 1 Thessalonians 5:21-22.  Test everything you hear with God’s word and cling to that which is good.

A Quest for Truth

Verifying facts is a daily responsibility for educators.  However, when the truth conflicts with one’s beliefs, theories or worldview, accuracy may be altered to coincide with your ideology.  Therefore, as individuals search for absolutes on the internet, don’t be surprise if truth is being suppressed.

When the Spirit of truth comes, he will guide you into all the truth, for he will not speak on his own authority, but whatever he hears he will speak, and he will declare to you the things that are to come. – John 16:13

Recently, Google has changed their algorithm for their search engine.  Initially, Google listed web sites based upon how many hits each received.  Thus, the most popular and trending topics would appear from highest to lowest.  In an opening monologue, Rush Limbaugh illustrated how Google caved after Chinese authorities complained about receiving negative press.  Subsequently, Google’s new algorithm runs based upon which sites their company believes to be most truthful.  Unfortunately, this once great company has been corrupted by declining ethics, now a pawn for the liberal media.

Think over what I say, for the Lord will give you understanding in everything. – 2 Timothy 2:7

Whether you are in the process of beginning a research paper, sorting through controversial issues or trying to broaden your understanding about life, make sure you do your due diligence.  According to 1 Thessalonians 5:21-22, test everything that you see, hear or read.  As your quest for truth continues, cling to that which is true, yet avoid any kind of evil.  Although skeptics may question or scoff at your findings, ask the Lord to direct your steps as this journey proceeds. Thus, you can go to sleep with a clear conscience, knowing the conclusion you reached derived from a quest for truth.

Since reading one of his chapters in Steeling the Mind of America, David Barton has become one of my favorite authors.  In his most recent work, U-Turn: Restoring America to the Strength of its Roots, I was shocked by what his research uncovered.  According to Barton, only 34 % of Americans believe in absolute truth.  If these numbers are true, this explains a culture who allows lies to be told, opinions to be elevated to fact status and morality based upon doing what’s right in your own eyes.

To add insult to injury, public schools in Texas are now teaching children the Pilgrims were America’s first terrorists.  Instead of reminding youth of Islamic militants who held American ships captive like pirates, the history of events like the halls of Montezuma to the shores of Tripoli are vanishing.  As parents struggle to provide for their families, the state and federal government are brain washing children with liberal, new age and progressive worldviews.  Unless the United States get’s back to its founding principles, it’s U-turn or bust.

When things began to change for Christians as Nero rose to power over Rome in the first century, the apostle Paul left a good piece of advice, 1 Thessalonians 5:21-22.  Whether you’re a child, adolescent or adult, don’t take my or David Barton’s words as gospel.  Rather, test everything you hear, read and see.  Do your own thorough research; then once complete, you can cling to that which you have found to be true.  The sooner you turn around toward the truth, the less likely you will be busted by lies of the devil. 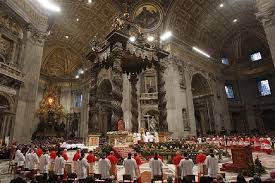 As far as I can remember, I grew up in a strict Roman Catholic Church: taking my first communion there, going to C.C.D. and finally completing the confirmation process.  In my early years, nuns would strike you with a yard stick if you couldn’t quote the Our Father or Hail Mary when put on the spot.  When I got older, it bothered me  that the priest had the final  say, only his interpretation of scripture was valid.  Thus, in high school, I began a quest to find out more about the Bible, looking beyond just the Catholic faith for answers.

This journey has lead me to passages like Acts 7:51.  Whether you are a Catholic, Protestant , Jew or some other religion, sometimes its hard to break the traditions that have been engraved within your mind.  When your priest, pastor or rabbi says something, most assume, this must be true.  However, religious practices often enable leaders to usurp power over their flock, holding them captive to traditions.  Similar patterns exist today, as seminary teaches future shepherds to follow theological practices, often overlooking the presence and power of the Holy Spirit.

The Bible says live by faith, not by sight, 2 Corinthians 5:7.  The apostle Paul furthers this concept in Galatians 5:25, keeping in step with the Holy Spirit, day by day, not just when we feel like or want to follow.  I am afraid that many Christians are so busy following orders and pursuing practices, they have been oblivious to the fact they are actually resisting the Holy Spirit.  Wherever you are in life, make room for the Counselor, John 14:16-17.  Resist the urge to follow human traditions, test everything you hear with the Bible and when God’s whisper appears, follow!