Engineer’s rely on designs, diagrams and models to implement plans on construction projects.  Multi-level business schemes use similar blueprints to influence individuals to buy into their concept.  When someone follows the directions step by step, there is an inherit expectation of riches, success or both.  As for Elijah the prophet, he looked into the past, believing God could repeat a similar feat in his life time.

According to Leviticus 9:24, as soon as Aaron followed the directions given to him from Moses via God, the Lord sent fire from heaven consuming the offering on the altar.  Sound familiar?  Perhaps, this is Elijah’s blueprint, the place where he read and believed God would repeat this historic act.  I often wondered where his confidence came from and this passage suggests Elijah prepared his sacrifice just as Aaron and his sons followed Moses’ commands.

Understanding the past, makes the miracle in 1 Kings 18:38 that much more believable today.  If you carefully follow and obey God’s commands, blessings will follow, Deuteronomy 28:1-2.  Its as if Elijah, followed a playbook in 1 Kings 18:30-37, grasping Jesus’ promise in Matthew 21:21-22, fully expecting God to repeat this previous miracle after his prayer.  Sometime between Elijah’s Blueprint and Jesus’ promise, modern believers will find a living, loving God ready to unveil the next miracle on earth.

Has God done any miracles in your life?

Put Me Back Together

Whether you want to admit it or not, everyone has 3 things in common with Humpty Dumpty.  First, at some point in time, you’ll find yourself living on the edge, trying to hang on or stay in control.  Second, you will experience a great fall, either physically, spiritually or both.  Finally, you’ll discover what it means to be helpless, needing someone else to put you back together.

In Psalm 31:12, King David compares himself to a piece of broken pottery, shattered into pieces.  The apostle Paul found himself in a similar predicament, using a jar of clay to illustrate the emotions he endured, 2 Corinthians 4:7-9.   C.S. Lewis referred to life as a car in Mere Christianity, trying to run on something other than petroleum, eventually breaking down since individuals didn’t follow the directions left behind by God.  Before you get well, you must acknowledge that you can’t do it on your own, in need of a Savior to stitch you back together, John 3:16-17.

Behind childhood fairy tales like Humpty Dumpty lie painful truths.  Solomon highlights this in Ecclesiastes 4:10 as friends are designed to pick us up when we fall.  Without somebody to turn to, pity reigns on these poor souls.  Therefore, if you’re hanging by a thread, lying in pain and waiting to be helped up, cry out to Jesus and He will put you back together, Luke 23:42-43.

Don’t Be So… Naive

The essence of naive is lacking experience, judgment and wisdom.  Words like guileless, sucker and unsuspecting give a clear depiction of coaches, parents and teachers who are lost in another world.  This state of denial is afraid to openly profess that their child, favorite pupil or prized athlete has been corrupted by a world full of moral pollution.

Unfortunately, Moses didn’t get the memo in Exodus 19:23.  Based upon his own words, Moses assumed that everyone in Israel would just follow the rules because God said so.  Surely, everyone is going to listen to the Lord.  Yeah, the One who parted the Red Sea, defeated the Amalekites and brought manna, quail and water into a barren desert.  By the time his own people created a golden calf, shortly after they thought he died, Exodus 32:1-7, Moses became painfully aware of the truth spoken by the prophet in Jeremiah 17:9.

People are like cars, we all have blind spots, areas where we can’t see objects that are right next to or behind us.  Thus, when someone crashes into us, breaks your heart or lets you down, its shocking.  Yet, if you adjusted your rear view mirror, maybe you could have seen this coming or possibly warned your friend before it was too late.  If you have been like an ostrich with their head in the sand or a turtle hiding in their shell, wake up now and don’t be so naive!

You Can’t Handle The Truth 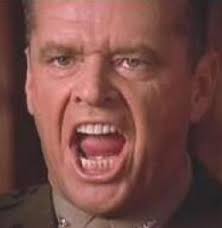 As I awoke early this morning, God convicted me of a painful reality.  Though I try to put on a good act, my daily priorities tell another story.  When I can’t even muster a few moments with God on the Sabbath, its a sign my heart is not in the right place.  In fact, my actions resemble King Saul in 1 Samuel 15:10-16, making things up as I go without following the Lord’s commands.

God didn’t send me a prophet like Samuel to reject me.  Rather, God used a nightmare to unveil the masquerade which is my pitiful display of Christianity.  The Holy Spirit drilled in me the danger of comparison, an at least you’re not like them mentality.  C.S. Lewis suggests that if you eliminate competition, pride can be eradicated in Book 3 of Mere Christianity.  However, the moment you start keeping score, 1 Corinthians 13:5, pride rears its ugly head. 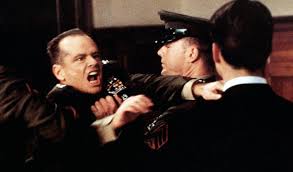 The Roman Church became susceptible to this temptation according to the apostle Paul.  Like most societies, Roman citizens began to rate specific sins, similar to a top 10 list used my numerous media outlets to enhance their weekly programming.  According to Romans 1:18-32, acts like wickedness, idolatry, homosexuality and sexual immorality made the top 5.  Yet, Paul pulls a fast one on these Roman Christians with one additional verse, Romans 2:1.  With a simple line, Paul knocks off all of these hypocrites from their pedestals.

This same logic resides in modern churches today, recently penetrating my own soul.  As people try to make themselves feel better through  a comparison of lesser individuals, they are entering grave danger.  Paul made sure he exposed the spiritual condition of these Roman believers with hard hitting facts from Romans 3:12.  What’s the truth about sin?  All sins are equal, except for blasphemy of the Holy Spirit, Mark 3:28-29.  Whether you failing to obey God’s commands or not upholding the truth of the Bible through inaction, both are sins, crystal clear in James 4:17.