It’s Not Beginning to Look A lot like Christmas

Perhaps Christmas has become passe?  Or maybe commercialism has contributed individuals from losing sight of its meaning.  Either way, holiday music has been unsuccessful in preparing hearts to find the Christmas spirit.

You don’t have to go any further than Black Friday’s encroachment upon Thanksgiving to see and feel these effects.  Thanking God for the day has been interrupted by football, movies and shopping.  Add in mobs of citizens making a mad dash to get the last item left in the store; then you’ll realize its not beginning to look like Christmas.

As long as hearts continue to dwell on selfish desires, Romans 3:9-12, individuals will be unable to experience the true meaning of Christmas.  Possessing the spirit of Christmas isn’t something you can turn on and off.  Rather, you need a heart transplant, Romans 10:9-10.  Only then, you will the grinch inside of you vanish, opening the door for good tidings and joy to shine through.

There’s No Change Without Pain

Self gratification has become like a cancer within the human soul, slowing eating away white blood cells of common sense.  This obsession fed by commercialism, “you can have your cake and eat it to,” has left individuals blinded by empty promises.  In a quest to fulfill this hunger, people have forgotten a simple truth of life: there’s no change without pain. 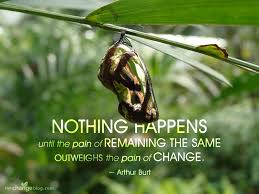 The apostle Paul speaks to this corruption while writing to the church in Ephesus, Ephesians 4:22.  As standards continue to decline, its easy to compromise, “well, everyone else is doing it?”  This futile thinking darkens understanding, leading individuals toward the cliff known as addiction.  Once formed or established, a continued lust for more can steer the disciplined into unhealthy habits, craving the latest junk food the world throws your way.

Snapping your fingers and poof, your request is granted is a mirage, a lie that the weak want to believe.  Real change requires developing a mindset of an Olympic  runner, ignoring pain so you can reach your desired destination, 1 Corinthians 9:24-27.   Regardless of what your body longs for, keep your goal in sight, Philippians 3:12-14 to avoid being sidetracked.  Like the song from Rocky IV, there’s No Easy Way Out.  Therefore, throw off any excess baggage, endure hardship and run with perseverance until change becomes reality, Hebrews 12:1-4. 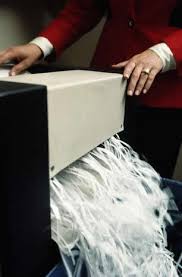 The expression “to push the envelope” became a common phrase in English speaking circles following the publication of Tom Wolfe’s book The Right Stuff in 1979.  The context of this term is derived from taking space travel to the next level with technology, pushing the outside of the envelope to reach new heights never experienced before.  Today, innovations take performance beyond previously accepted boundaries through apps, electronic devices and household luxuries.

Unfortunately, these societal advances have created a few negative side affects.  Self indulgence, instant gratification and materialism has placed God on the back burner in life.  Like the days of Babel, Genesis 11:3-4, commercialism is attempting to bring heaven to earth through a mere click of your mouse.  Thus, by leaping ahead, this once pure envelope has experienced a gradual decline, shredding the values of America.

I am not sure where or when this initial tear began, but I don’t think there are enough pieces remaining to restore a nation founded on biblical principles.  Adult bookstores, drugs or immorality are no longer an isolated occurrence.  With roughly one quarter of the internet URL’s pornographic in nature, the world is more than ever surrounded by evil.  Everyone wants to get better as a person, yet are people willing to compromise what they believe?  May God have mercy on this nation, turn wicked hearts toward prayer and mend those who have been shredded by the gravitational pull of sin.