The Resurrection Band who also go by Rez for short formed their Christian rock band in 1972. Rez band members were part of the Jesus People USA Christian community in Chicago. The Resurrection Band is known as one of the forefathers of Christian metal. Yet, when you listen to their music, Rez blends blues-rock and hard rock. Today’s featured song Footprints pays homage to the famous poem.

Come to Me, all you who labor and are heavy-laden and overburdened, and I will cause you to rest. [I will [o]ease and relieve and [p]refresh [q]your souls.] 29 Take My yoke upon you and learn of Me, for I am gentle (meek) and humble (lowly) in heart, and you will find rest ([r]relief and ease and refreshment and [s]recreation and blessed quiet) for your souls, Matthew 11:28-29.

Footprints was initially ascribed to anonymous, reflecting upon times in life where Jesus carries you when you’re weak. One of Jesus’ disciples writes about one of Jesus’ speeches where he compares himself to a spiritual lifeguard. As people are struggling to stay afloat in life, Jesus asks a first century crowd to lay down their burdens. May the song Footprints inspire you to come to Jesus with your problems in prayer. 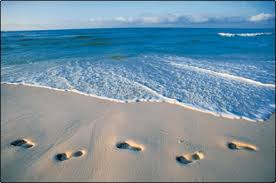 In the famous Footprints poem, Carolyn Joyce  Carty uses a dream of a man walking along a beach barefoot with the Lord.  Looking back, this man sees only one set of footprints at times, not two.  Like the countless who have been touched by this piece, during the difficult times in life, the Lord carries us until we have the strength to walk again.  Nonetheless, I have discovered in 2012 from personal experience, there is so much more involved when God sends angels to carry you.

Prior to this year, I was filled with pride based upon my accomplishments and somewhat stellar career.  Athletically, I have been able to play professional golf, coach for a decade at the high school level and received an invite to play for a professional Ultimate Frisbee Club in Philadelphia, Pennsylvania.  From a business sense, I was a manager of the Michael Jordan Golf Shop in O’Hare International Airport, on pace to do 1.1 million in sales under my leadership before I left and a production manager for a prominent Christian company.  Finally, during 15 years of service in youth ministry as a pastor and teacher,God used me to impact the lives of young people.  Yet, in the good times, I took most of the credit, leaving God off stage.  Thus, all of these accolades were stripped away a little over 12 hours into 2012, creating a desperate, humble and weakened man.

Most of my days in 2012 began with a similar prayer, “Lord, I can’t do this without you!”  While I talked a good game the past 25 years, I was forced to daily practice Jesus’ own words in Matthew 11:25-30.  From an emotional sense, I had become like the man in Acts 3:1-5, crippled by broken promises, shattered dreams and unemployment.  Peter didn’t come to my rescue like his words to the beggar in Acts 3:6-7.  Instead, God sent numerous friends at appointed times, facebook messages, phone calls and the occasional angel to lift me up, until I could walk on my own once again.  If you are feeling helpless like I have for most of 2012, exercise the authority available in Christ, Luke 10:19.  This will serve as spiritual physical therapy until God renews your strength, Isaiah 40:30-31.