The Picture of Perfection

As a young aspiring athlete, my picture of perfection was the best player in every sport. Wayne Gretsky in hockey, Dr. J in basketball, Steve Carlton in baseball and Reggie White in football. Before the existence of social media, news was strictly based upon a player’s performance. Today, there is no picture of perfection as critics on the right and left pick apart rising stars like vultures during a feeding frenzy.

You, therefore, must be perfect [growing into complete [ak]maturity of godliness in mind and character, [al]having reached the proper height of virtue and integrity], as your heavenly Father is perfect, Matthew 5:48.

The Sermon on the Mount points to perfection, but in the sense of striving towards it. The apostle Paul quotes an Old Testament prophet in Romans 3:9-12 to burst the bubble on human perfection. In case you haven’t heard, this is impossible as all men and women has fallen short of God’s glory despite how hard each has tried, Romans 3:23. Despite this painful reality, Hebrews 4:15-16 refers to Jesus as a great high priest who was a model of perfection, dying on our behalf.

For we are God’s [own] handiwork (His workmanship), [d]recreated in Christ Jesus, [born anew] that we may do those good works which God predestined (planned beforehand) for us [taking paths which He prepared ahead of time], that we should walk in them [living the good life which He prearranged and made ready for us to live], Ephesians 2:10.

If life is meant to be a series of trial and error, sooner or later you’ll start to take steps toward perfection. The apostle Paul compares God to a spiritual potter, constantly molding and fashioning us into His image, Romans 9:20-21. Meanwhile, Paul compares God to a carpenter in the passage above. Depending upon your gifts and talents, the Holy Spirit seeks to guide you toward the good works God has planned for you in the future, Philippians 1:6. As you keep in step with the Holy Spirit, Galatians 5:25, may your life resemble the fruits if God’s Spirit like a picture of spiritual perfection.

Posted in Truth and tagged a model of perfection, aspiring athletes, carpenter, Dr. J in basketball, gifts and talents, Great High Priest, keep in step with the Holy Spirit, potter, Reggie White, striving towards perfection, The Holy Spirit, The Picture of Perfection, the Sermon on the Mount, trial and error, Wayne Gretsky. Bookmark the permalink.

During the last half century, I have been fortunate enough to attend, listen and participate in numerous inspirational events.  I went to Veterans Stadium in Philadelphia, Pennsylvania during a Billy Graham Crusade to hear NFL Hall of Famer Reggie White speak.  Shortly after getting married, I heard former Colorado football coach Bill McCarthy address a crowd of sixty five thousand men during a Promise Keepers event at Soldier Field.  I spent a year under the spiritual leadership of Alistair Begg, the voice of Truth for Life ministries at the Chapel in Solon, Ohio.  Finally, I spent another year soaking in the knowledge of John Ortberg via Community Services at Willow Creek Community Church in Barrington, Illinois.

But even as he was saying this, a cloud formed and began to overshadow them; and they were [greatly] afraid as they entered the cloud. 35 Then a voice came out of the cloud, saying, “This is My beloved Son, My Chosen One; listen and obey and yield to Him!” – Luke 9:34-35

Many of these speeches invigorated my soul, eager to live out my faith.  Yet, there is one message that stands alone in the Bible.  In the passage above, there were only four people present.  Beside Jesus, James, John and Peter were on a mountain that was engulfed by clouds.  This formation is similar to a heavy fog, limiting your visibility to a couple of feet.  Within this cloud, the voice of God the Father spoke.  To make sure there isn’t any doubt, God identifies Jesus as his own son.  Believing that brevity is clarity, God the Father shares seven words.  The command is simply: listen, obey and yield to Jesus.

When the voice had ceased, Jesus was found there alone. And they kept silent, and told no one at that time any of the things which they had seen [concerning the divine manifestation], Luke 9:36.

Listening means to be attentive, concentrate, hang on and keep your ears open.  Obeying is the act of accepting, bowing, carrying out, deferring to and submitting to that which is being recommended.  Yield refers to bear, contribute, fetch, gather, provide and realize the plan.  In this context, the calling that God has designed for your life.  According to the passage above, theses three disciples were in awe, reflecting upon what had just happened.  None of these men revealed this event until after Jesus rose from the dead.  Although there were only three eye witnesses, God’s message to modern believers hasn’t changed.  Listen, obey and yield to Jesus.

Sam Mills was a gritty defensive player in the National Football League.  Despite his 5 foot 9 inch frame, Mills played 12 years in the NFL, spending his time with the New Orleans Saints and Carolina Panthers.  Before entering the NFL, Mills spent 3 seasons with the USFL’s Philadelphia Stars earning the nickname Field Mouse for his tenacity.  Playing along side Hall of Fame defensive end Reggie White, the Stars won 2 league titles.  Through the years, Sam became a leader on and off the field, eventually serving as an assistant defensive coach for Carolina following his retirement.

Blessed is the man who remains steadfast under trial, for when he has stood the test he will receive the crown of life, which God has promised to those who love him, James 1:12.

Before his untimely death, Mills was known for giving inspirational speeches.  Prior to a playoff game with the Dallas Cowboys in 2004, Mills encouraged his defense to Keep Pounding for 60 minutes, referencing his battle with cancer.  This phrase became a mantra for the Carolina Panthers as the team later added a drum to drive this message home to each player.  In April of 2005, Mills succumb to his battle with cancer, dying in his home town of Charlotte.  In the following fall, the Panthers honored Mills by retiring his number 51 jersey.  The legacy of Sam Mills continues today with the theme, Keep Pounding.

And let us not grow weary of doing good, for in due season we will reap, if we do not give up, Galatians 6:9.

In the verse above, the apostle Paul uses a different way of expressing keep pounding.  Instead of applying this to football, these words refer to life.  Everyone will face trials in life.  Whether it’s an accident, illness or unforeseen circumstance, staying positive isn’t easy.  Yet, when you develop perseverance and a will to keep pressing on, God honors the steadfast.  Therefore, whatever obstacle is currently standing in your way, keep pounding until victory is obtained. 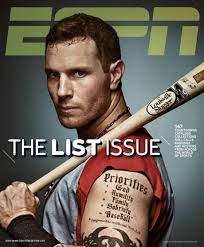 Like Bill Murray in Scrooged running from the ghosts of Christmas, Josh Hamilton understands the meaning of having a checkered past.  A former number one pick of the Tampa Bay Rays in 1999, this blue chip prospect had his baseball career derailed by a drug addiction.  A living example of 1 Corinthians 15:33-34, Josh Hamilton was led astray by his association with a tattoo parlor which influenced him to experiment with illegal drugs and alcohol.  After a visit to the Betty Ford drug rehabilitation center, Josh improved until failing his first of 2 drugs tests, leading to his exit of baseball for an extended period of time.

Josh’s story and comeback became a national headline after airing on ESPN’s Homecoming with Rick Reilly in January of 2009.  Appearing in his hometown of Raleigh, North Carolina, Josh shared skeletons from his past as well as his new relationship with the Lord Jesus Christ.  After being traded to the Texas Rangers from the Chicago Cubs, his new team put in place an accountability system to prevent Josh from back sliding into his former bad habits.  Since being acquired from Chicago in 2007, Josh has been selected to 5 all-star teams, won the 2010 American League Most Valuable Player award and led Texas to 2 consecutive World Series appearances in 2010 and 2011.

As a current free agent, teams are afraid Josh’s body will break down physically, revert to his former life or simply isn’t worth the 4 years, 100 million dollar contract experts think he will receive.  This is where the Philadelphia Phillies make a great marriage on and off the field.  With Carlos Ruiz suspended for the first month of the season for using amphetamines, Josh Hamilton would look great between Chase Utley and Ryan Howard.  Although, this would make the Phillies vulnerable to left handed relievers, any right handed starting pitcher might soil their pants every 3 innings when facing these sluggers.

Off the field, Philadelphia has a history of strong charismatic Christian athletes on their professional sports teams beginning with Reggie White with the Philadelphia Eagles in the 1980’s.  Former eagle and future NFL hall of famer, Brian Dawkins would make a great mentor for Josh Hamilton, a true example of Jesus Christ.  Meanwhile, Josh could reside in Ocean City, New Jersey, a dry city since its establishment in 1879, a little over an hour drive from Citizen’s Bank Park.  Christians flock from all over the East Coast to this quaint beach side community, a perfect place for Josh to call home.  I may be dreaming of another big free agent signing, yet Josh Hamilton would look great in Phillies’ pinstripes.