Heavy metal music was conceived in the late 1960’s and became popular in Great Britain in the early 70’s. By the middle of the 1980’s, heavy metal was accepted and embraced by North America. When I needed a beat a little harder than rock, I turned to metal to raise my level of intensity.  One of the Christian metal groups that I discovered in college was Xalt.

Be well balanced (temperate, sober of mind), be vigilant and cautious at all times; for that enemy of yours, the devil, roams around like a lion roaring [[f]in fierce hunger], seeking someone to seize upon and devour, 1 Peter 5:8.

Xalt relies on a classic metal sound with lyrics straight out of the Bible. On their Under the Ruins album, Xalt warns its listeners of the Devil and his attempt to steal, kill, and destroy souls, John 10:10. In today’s featured song Under the Ruins, the group exposes the schemes of the Devil, Ephesians 6:11-12. If you don’t take this advice seriously, you might find yourself feeling defeated; left under the ruins of despair.

Posted in Truth and tagged Great Britain, Heavy metal music, intensity, North America, S.A.N.S. Episode 73: Under the Ruins, The Bible, the devil, the schemes of the devil, Under the Ruins by Xalt, Xalt. Bookmark the permalink.

The Conqueror’s Crown of Glory

As a former coach for nearly two decades, there are numerous ways to motivate athletes. Some respond to food, others want to get their names in the newspaper, and a few do whatever it takes to win. Each of my three children possessed a little bit of these desires. My oldest son James wanted to know what place he needed to get to earn a medal. My middle child Daniel was the best all-around athlete in the family who is most passionate about winning. Meanwhile, my daughter Lydia is easily motivated by deals that I make with her based upon performances. Whatever it takes, set a goal and reward this once achieved.

And [then] when the Chief Shepherd is revealed, you will win the [a]conqueror’s crown of glory, 1 Peter 5:4.

As a former runner, Chariots of Fire was one of my favorite movies in high school. The inspiration behind this title comes from the William Blake poem adapted into the British hymn “Jerusalem.” Chariots of Fire follow two athletes who win gold medals for Great Britain at the 1924 Summer Olympics in Paris, France. While Harold Abrahams is the more gifted runner, Eric Liddell runs to glorify God through his faith. However, when his best chance to win gold is moved to Sunday, Liddell is able to convince his coach to switch races so that he doesn’t break his vow to keep God’s Sabbath holy, Exodus 20:8.

Do you not know that in a race all the runners compete, but [only] one receives the prize? So run [your race] that you may lay hold [of the prize] and make it yours. 25 Now every athlete who goes into training conducts himself temperately and restricts himself in all things. They do it to win a wreath that will soon wither, but we [do it to receive a crown of eternal blessedness] that cannot wither, 1 Corinthians 9:24-25.

In the passage above, the apostle Paul is referring to the Isthmian Games that were hosted by the city of Corinth. This ancient Track and Field Event took place in non-Olympic years. After archeologists uncovered remains of Corinthian pubs, it’s likely that many who attended the Isthmian Games would stop by, have a drink, and talk about this sporting event. Appealing to Corinth’s rich sports history, Paul wants to remind his readers of the Conqueror’s Crown of Glory. Since only three contestant’s win a medal, live your life in such a manner that you will receive an eternal crown that will last. This should be your ultimate goal in life, Romans 10:9-11.

The Mystery of the Kingdom of God

Whose Line is it Anyway began as a radio program in Great Britain before moving to television in 1988.  This improvisational comedy show uses 4 celebrities who participate in a series of skit like activities.  The only catch is that these individuals must make up things as they go, without any planning, off to the top of their heads.  From 1998 to 2007, Drew Carey served as the host with Wayne Brady, Colin Mochrie and Ryan Stiles as the regular contestants, alternating a few others as the fourth.  One of the games played is Questions Only, where interactions between 2 people must begin with a question.  If not, contestants get buzzed by the host, switching with the person on their side of the stage.  The concept of questions only is nothing new as Jesus used this conversational style to reveal the mystery of the kingdom of God during the first century.

As soon as He was alone, those who were around Him, together with the twelve [disciples], began asking Him about [the interpretation of] the parables, Mark 4:10.

The first 4 books of the New Testament include 46 parables used by Jesus.  These simple stories were used to illustrate a moral or spiritual truth.  Similar to modern analogies, stories tend to hold the attention of an audience.  Jesus used common occupations such as farming or fishing to speak to the massive crowds which followed him.  In a sense, Jesus was a motivational speaker, using faith as the vehicle to overcome the obstacles confronting people.  The context of the passage above follows the Parable of the Sower.  This story involves seeds planted in four different types of soils.  Each environment upon which these seeds fell greatly influenced the overall growth.  Perhaps confused by these details, the disciples requested a private meeting with Jesus, hoping to clarify the correct interpretation of this parable.  This is where Jesus began to unveil the mysteries of the kingdom of God.

He said to them, “The mystery of the kingdom of God has been given to you [who have teachable hearts], but those who are outside [the unbelievers, the spiritually blind] get everything in parables, Mark 4:11.

The apostle Paul in Romans 1:18-20 claims that all human beings come into contact with the invisible qualities of God.  Signs of creation like rainbows, sunsets and the birth of a newborn child are clearly seen so that no one is without excuse.  This sets the stage for the Parable of the Sower.  The kingdom of God is presented to everyone at some point in their lives.  Unfortunately, the timing is not always good.  Thus, some people receive this news when their heart is hardened, landing on compacted ground.  This seed is stolen by the evil one.  Others are introduced to Jesus during rocky times, when people are unstable, not on firm footing.  Thus, without any room for roots to develop, storms, turbulent times and unforeseen events uproot any type of faith that had been planted.  Meanwhile, many people seek God when stress, trials or worries become too much of burden.  However, if these conditions persist, joy for life is lost, choked by spiritual briar patches and sticker bushes that continue to wound your soul.  The only way to recover from bad environments is by plowing the soil around you to allow living water to nurture the seed sown into your heart.  If necessary, add bags of dirt, remove any rocks that stunt growth and don’t forget to weed wack.  May you reach the point of Matthew 9:12, mature enough to feed yourself spiritually with a combination of Bible Study, prayer and worship.  Come to your senses quickly and emulate the persistent widow so that the kingdom of heaven will be your home, John 14:2.

Posted in Truth and tagged 46 parables used by Jesus, Colin Mochrie, Drew Carey, faith, Great Britain, heart, joy, Questions Only, rainbows, Ryan Stiles, sunsets, the invisible qualities of God, The Mystery of the Kingdom of God, the Parable of the Sower, Wayne Brady, Whose Line is it Anyway, wounds to your soul. Bookmark the permalink. 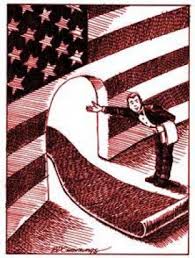 The term “Open Door Policy” was adopted in 1899 by the United States in circular notes dispatched by the Secretary State John Hay.  These letters were sent to Great Britain, Germany, France, Italy, Japan and Russia addressing the need for the protection of equal privileges among countries trading with China.  Today, open door policy’s refer to management who is willing to discuss, listen and talk with employees about their concerns, frustrations and problems.

While stereotypes about God include fire, brimstone and striking people down for sinning, Psalm 24 reveals a far different picture.  Psalm 24:7 suggests that people, not God are closing their doors.  If Israel would just open their gates to Jerusalem and keep their doors ajar, the King of Glory wishes to enter.  Two verses later, David repeats himself with the identical words, “Lift up your heads, O you gates; lift them up you ancient doors, that the King of glory may come in,” Psalm 24:9. 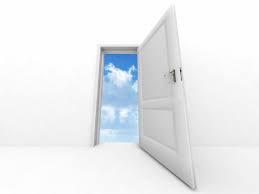 Jesus recounts a similar open door policy in Revelation 3:20.  According to John, who quotes Jesus, a door is separating people from seeing Jesus face to face.  Unlike a typical door, this door contains only one handle which is on our side.  Jesus is on the other side, patiently knocking, waiting for you and me to let Him in.  However, Jesus don’t does not force himself until our lives.  Freewill is the difference between an open or shut door.  Therefore, if you want to experience God’s open door policy today, Jesus is waiting for you to let him in so that your relationship may begin, Romans 10:9-10.