An Eagle’s Perspective on Life

As someone who grew up 30 minutes from South Philadelphia, whenever an eagle is brought up, I immediately think of the National Football League franchise “the Philadelphia Eagles.” Meanwhile, the bald eagle became the iconic emblem of the United States on June 20th, 1782. While the eagle represents freedom in America, the Bible provides an eagle’s perspective on life.

Even youths shall faint and be weary, and [selected] young men shall feebly stumble and fall exhausted; 31 But those who wait for the Lord [who expect, look for, and hope in Him] shall change and renew their strength and power; they shall lift their wings and mount up [close to God] as eagles [mount up to the sun]; they shall run and not be weary, they shall walk and not faint or become tired, Isaiah 40:30-31.

Prior to the invention of drones, eagles would provide a bird’s eye of the earth. One Old Testament prophet compares the Lord to a mature eagle. Although young Christians become exhausted, tired and weak, the power of the Holy Spirit will rise you up by renewing your strength. The above passage serves as a promise from God whenever you feel like you don’t have the energy to take another step in life.

Then I [looked and I] saw a solitary eagle flying in midheaven, and as it flew I heard it crying with a loud voice, Woe, woe, woe to those who dwell on the earth, because of the rest of the trumpet blasts which the three angels are about to sound! – Revelation 8:13

Yet, the title of today’s blog comes from a vision from John the Revelator. Following the 4th of seven tribulations in the book of Revelation, John sees an eagle flying solo. After scanning the devastation from the first 4 tribulations, this eagle cries out in a loud voice. Like a news video after a natural disaster, this eagle’s perspective on life serves as a cautionary tale of the troubling times ahead in the end of days.

Posted in Truth and tagged a promise from God, An Eagle's Perspective on Life, bald eagle, drones, eagles, freedom, natural disaster, Philadelphia Eagles, South Philadelphia, the end of days, the iconic emblem of the United States, the National Football League, the power of the Holy Spirit, vision. Bookmark the permalink.

The Parable of the Unknown

A young native American was tracking prey at the base of a mountain when he came across an undamaged egg which fell out of a nearby eagles’ nest. After trying to place this egg back where it belonged, the ledge was too steep to climb while holding this egg. Instead of abandoning this egg, this boy found a similar vacant nest closer to camp. Approaching quietly, this boy carefully placed this egg next to three addition eggs.

A tranquil heart gives life to the flesh, but envy makes the bones rot, Proverbs 14:30.

Several weeks later, all four eggs hatched. Instead of being the ugly duckling, the eaglet stood out among the other three flightless cormorants. As his adopted mother taught him to swim, another bird caught his eye, flying and soaring high above this lake. As the eagle above gracefully glided in the air, the swimming eagle became jealous, wishing he could fly instead of just swimming. While the others were natural swimmers, this eaglet struggled to find his way through life.

I will never forget your precepts, for by them you have given me life, Psalm 119:93.

This parable that I recently heard struck a nerve. Sometimes I am so focused on how gifted other people are that I forget my own blessings, gifts and talents. Meanwhile, when I spend too much time focusing on what I want or need, I neglect God’s expectations for me as a Christian. When there is no one else around to point you in the right direction like the adopted eaglet, the Bible is available to show you the way. May you follow in the footsteps of Joshua 1:8, meditating on God’s Word day and night.

As a person who enjoys watching sports, I’ve met several fare weather fans in life.  When the local team is winning, there isn’t enough room on the bandwagon.  However, as the years pass without a Superbowl win, Stanley Cup, NBA championship or World Series title, a mass exodus occurs.  This trend causes individuals to adopt other teams like the Dallas Cowboys, Miami Heat or New York Yankees to raise their self esteem.  Time will distinguish the casual fan from the avid follower, living and dying with their team despite the anguish or pain.

Jesus used another method to disclose fans from genuine followers.  One day, a first century doctor, watched in awe as Jesus began to ask a few people some questions, Luke 9:57-63.  Like a coach pushing his players to see who will rise to the top or quit, Jesus’ words pierce the hearts of these lukewarm fans.  Despite their good intentions, one by one, each fell by the wayside, unable to meet the conditions Jesus was searching for in a follower.

Whether I’m shaking my head at another Phillies loss, Eagles meltdown, Flyers defensive breakdown or 76er’s losing streak, being a fan in the greater Philadelphia area isn’t easy.  On the other hand, being a followers of Jesus is even harder, Matthew 10:32-39.  Sometimes I find myself in the shoes of the ruler in Matthew 19:16-25, wondering if I have the moxie to endure life’s trials.  Unfortunately, my actions don’t always express what I believe.  In the end, I’m at the mercy of God, relying on Him to make the impossible a possibility, Matthew 19:26.

Where do you find yourself on the spectrum of fan or follower?

Why is God Taking so… Long?

In this day and age, waiting is like praying for patience, nobody wants to do it.  The essence of waiting involves one of two options: either stay where you are or delay your plans until something happens.  However, if you’re not in a safe place common sense will urge you to move.  Meanwhile, if you don’t know what you’re looking for, you might overlook the obvious sign God has provided.

In Psalm 22:1, David’s prayer mirrors Jesus’ words in Matthew 27:46.  David went from the out house as a lonely shepherd, living in country fields under the stars to the penthouse, anointed as the next king of Israel in 1 Samuel 16:13.  However, the catch was David had to wait until Saul’s death until this dream became a reality.  A whirl wind took David to the king’s palace as a servant to the king, playing his harp, to a battle field, defeating Goliath and to a cave fleeing the wrath a jealous king, literally running for his life.  This is the context in which David felt forsaken and forgotten, unable to wait any longer.

Meanwhile, Jesus spent 6 hours hanging from a cross before his death.  Without any pain killers, Jesus endured excruciating  pain as 3 modern railroad sized spikes went through each hand and both ankles.  If this wasn’t bad enough, insults and mocking followed, carrying on for hours.  Grasping for air to breath, having a conversation to share his final words was exhausting.  Thus, God the Father went silent, allowing His Son to finish the task that Jesus was sent to earth to complete, Luke 19:10.  Not able to wait any longer, Jesus gave up his spirit, succumbing to the natural forces of life.

Perhaps, Hebrews 12:4 was placed into the pages of the Bible for impatient people on earth.  Despite the trials you encounter in life, God reminds mankind that at least you didn’t have to shed your blood on a cross.  With this subtle reminder, may God fill you with the spirit of Isaiah 40:28-31.  If you find yourself tired, weary and lacking understanding, may the wings of eagles lift you up as wait on God.  In your weakness of impatience, God is strong, carrying you periodically when you can’t tarry on, 2 Corinthians 12:9-10.  Although I don’t know why God is taking so long to reveal His plan to me, I am clinging to His promise of a brighter future, Jeremiah 29:11. 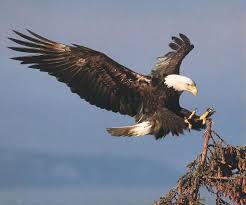 Since the extinction of the dinosaurs, likely a result of the atmospheric changes following the flood, Genesis 2:5, the eagle has become king of the air.  With only one known predator, the condor, eagles reign in the sky above.  This explains why condors attempt to bring eagles to the ground, digging in their talons, using their superior weight to eliminate an eagles flight advantage.  However, unless a condor can get an eagle to the ground, this predator will go hungry until another carcass is located. 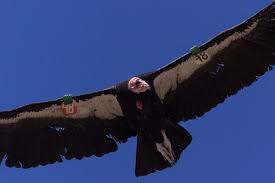 In this culture, predators lurk on every corner, looking to pounce on a smaller or weaker opponent.  One of the few defense mechanisms an eaglet has is their God given ability to fly.  Yet, until their father pushes each eaglet out of the comfort of home, their nest, this talent remains hidden.  Thus, the daddy eagle introduces his children to flight school, allowing each adolescent to fall before swooping in to catch a youngster before they hit the ground.  This process continues several times until each student takes flight, gliding on eagles wings, Isaiah 40:31. 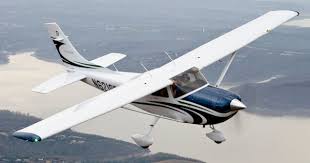 In the same manner, Christ followers must learn to spiritually fly by fanning into flame the unique gift or gifts God has blessed each with, 2 Timothy 1:6.  Satan is the condor in our lives, using the world as a vehicle for destruction.  If you are not careful, specific sins will take hold of you, dragging you downward, often resulting in crash landings.  In this flight school, there is no commencement or graduation.  Rather, this teaching never ends, a life long pursuit, Colossians 4:2-3.  Using the Bible as its manual, this school’s final destination will take you where few have been, but many will be, John 14:2.