Political battles rage daily in congress, making their case of pulling out, not backing another country or recognizing that some wars you can’t win.  Whether its the war in Afghanistan, Iraq or the next tense situation, common sense screams, “certain places in the world aren’t worth fighting for since there is no clear winner if you engage in war!”  When this or that country has been battling it out for centuries or close to a thousand years, why shed innocent blood?  Hopefully, someone in Washington D.C. will learn this lesson soon.

On American soil, there is a different kind of war brewing, the war of public opinion.  In the 1997 film Wag the Dog, Dustin Hoffman plays a Hollywood producer who deceives the American people of a fictional war in Albania.  Using special effects, talking points and a montage of sound bytes, Hoffman convinces the people of a war that doesn’t exist.  Today, Blogs, Facebook, Twitter and Youtubes are the weapons of choice, steering minds in their direction.  In a world of shrinking absolutes, where opinions have become elevated to fact status, this war is like chasing the wind.

The only thing you can control in this life is your own character.  Sure, your enemies will attempt to assassinate your reputation, yet your actions, attitude, behavior, body language and words serve as a means of defense.  As long as you are consistent, you can’t control what others says on blogs, Facebook or Twitter.  Therefore, fighting back or responding to your critics is futile.  By coming down to their level, you are strengthening their argument.  Despite the mud opponents sling your way, display prudence by recognizing they are some wars you just can’t win. 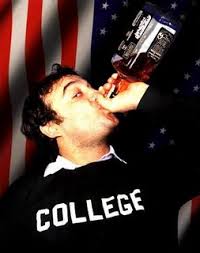 When I attended the University of Delaware, I experienced another world.  Though I wasted my first semester chasing after an Animal House like happening, it wasn’t long until I had to face reality; the party life wasn’t for me. I had to stay true to my convictions, accept my relational weaknesses and stop being fake.  Its no wonder that the disciple Peter uses the expression sober in 1 Peter 4:7, calling people to be real by stopping the non-sense mentioned in verses 3-6.

Unfortunately, many college students never leave their drunken stupor, carrying it over into adulthood.  Meanwhile, people are in denial of life’s end, thinking everyone will go to heaven, no matter what they have done in life.  While its true heaven is not solely dependent upon what you do, Ephesians 2:8, faith does require action, James 2:26.  James, the brother of Jesus, lived amongst the son of God without ever believing in him.  It took a painful death, burial and subsequent resurrection of Jesus for James’ faith to come alive.  James 2:14-26 is a clear proclamation to stop the non-sense by aligning your deeds with your faith.

I was saddened to hear about Kansas City Chief’s player Jovan Belcher killing his girlfriend, driving to their practice facility, then shooting himself to death in front of head coach Romeo Crennel and general manager Scott Pioli.  The only comparable thing I can remember from my own life is when a foreign exchange students from Japan committed suicide by walking into the path of a on coming train after her parents disowned her for becoming a Christian during her last semester of college.  Whether you like it or not, death forces individuals to think of the after life, heaven or hell.  You can’t sugarcoat this fact from the Bible, Matthew 7:13-14, with more going down instead of up if you take the Bible literally.

Though some churches claim murder is an unforgivable sin, this is not biblical; only blasphemy of the Holy Spirit is not forgiven according to Jesus in Matthew 12:31.  This too is often confused, especially with youtubes comparing denying God with blasphemy.  In the end, only God knows your heart.  However, people have to stop lying to themselves and open their eyes to what is truly going on around them.  Listen closely to the language daily spoken.  What are the majority of television commercials really selling?  How many laws are being broken by these new reality shows?  Wake up America while you are still alive!  Remove the garbage you are daily digesting, come to your senses like the prodigal son in Luke 15:17-18 and embrace your heavenly father who loves and created you.  In light of this latest tragedy, the sensible thing to do is to prepare yourself for the after life, 1 Peter 4:8-11.

Pray for the Chiefs, the families affected and for those who have not made their eternal reservations, 1 John 5:13.