The First Game of Crying Uncle

The expression of crying uncle appears to have some ties to the Roman Empire.  During the first through third centuries, when a child was bullied by a stronger individual, they were coerced to use the Latin term Patrue.  Once spoken, meaning uncle, the dominant figure would release or set free the person they had cornered. 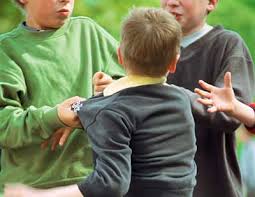 Today, when an older sibling catches up to a faster and younger sister or brother, either holding onto or sitting on them, a power trip rushes through their soul.  As a result, the elder statesman in the house usually seeks total submission before letting go or getting up.  Like a bribe, torture continues until a person finally gives in, “crying uncle,” at the top of their lungs.

While researching this topic, I stumbled across a biblical account that might of inspired the first game of crying uncle.  According to Genesis 32:24-26, Jacob participates in a wrestling match which lasts all night long, something the founders of W.W.E. would be proud of.  Holding on for dear life, Jacob refuses to let go until this stranger blesses him.  Unbeknownst to Jacob, his opponent is God himself, Genesis 32:27-30.  Although he does not force God to say uncle, Jacob follows a Jesus like approach to acquiring what he desires, Matthew 7:7-11.

The next time you feel caught, captured or cornered by the devil, try to emulate Jesus’ model for prayer.  Don’t forget to ask God specifically, crying uncle, confessing that you can’t make it in life on your own strength.  If nothing happens right away, keep on seeking God for advice, answers and direction.  Finally, like Jacob, hold on to God, by knocking on heaven’s door until you receive the blessings of God!